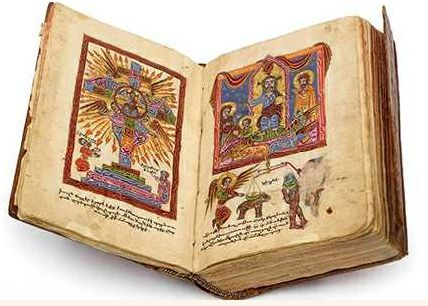 The issue of Study, Preservation and Restoration

of the Armenian Mural Fine Art 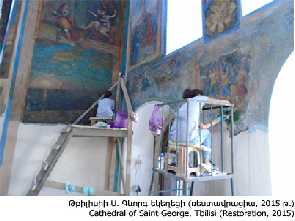 Here is a the current status of  the research on the Armenian Mural art.

We have some literature available. These articles and books are written by independent, individual researchers about their finds on  specific murals.

In fact,  between the 1940 - 50s  and  early  in the 1980s, Murals were copied/sketched  in Armenia, and the the job was initiated by the National Gallery of Armenia, and  executed by a team, headed by Lidia Turnovo, the murals were copied/sketched at Lmpadavank Monastery, Aruj ( 7th, century ), Datev, Haghbad ( 10th, century ), Kopayr ( 13th, century ), and elsewhere. Another team had headed to Akhtala and copied large parts of the murals. However, there are different, other mural copies/sketches as well currently on display at the National Gallery of Armenia. 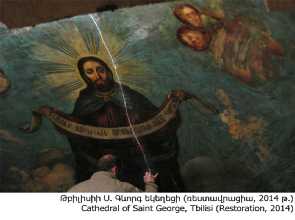 One of the most pressing issues, ( in need of immediate attention ) is  the research/study and preservation on one of the elements of the Armenian cultural heritage, before it is lost forever,  the Armenian Mural Art.

Among the several steps, we have a desperate need to move in preplanned, well programmed two  basic directions: Scientific research and preservation, which includes the restoration work on the existing murals.

The scientific research must start with a  consolidated list and the creation of  an information database , where every monument must  have a record of its own, clearly stating its history, style, indicating the time of creation, descriptive , analysis about it, writings, corrections, restorations, sketch and coloring  technology used,  scientific references, or historical references to it ( in other sources ), this will create a bibliographic documentation for every mural / in other words, a scientific passport, or identity card. Based on this guideline  it would be possible to  create a map of Armenian murals.

The research and preservation of the existing murals  will involve  experts on  painting restoration along with programs and plans to execute these missions.

Each mural needs to be evaluated, time and cost of restoration will be  assessed, also  prioritization of the restoration of murals which are in the  more desperate need for attention. The restoration could start as soon as the necessary funds become available.