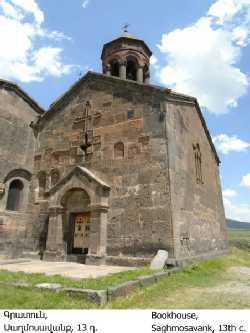 it is traditional to study manuscripts according to their location, i.e. their scriptorium, as, being written in the same place they often show similarities of calligraphy or miniature painting, details completing each other and so on. The study of Armenian scriptoria, as a sphere of Armenian studies, developed in the Mashtots Matenadaran since the 1960-ies and the 1970-ies on the initiative of the late Director academician Levon Khachikyan. In the 1970-ies two maps were drawn, in correspondence with special card index, for the Exhibition Hall of the Matenadaran (author Artashes Matevosyan).

What about the detailed investigation of each scriptorium, up to now studies have been done only partly (studies are written about some scriptoria, as the monastery of Metzop, Ani, the Sevan monastery, Skevra; articles have been devoted to others). At present, special themes of study are being put forward in the Matenadaran. They will be devoted to the history of Artsakh, Vaspurakan, Cilician Armenia, Haghpat and Sanahin scriptoria.

In the whole notion of scriptorium one can separate two different milieus of manuscript creating: the place and the scriptorium.   The place of writing may be any locality, a village, a little town, a fortress or a town, in which calligraphers dwelled (as a rule they were clergymen) and, getting the order of writing a manuscript, they copied it, while scriptoria were functioning mostly in monasteries, or close to them. There, manuscript copying and every work connected with it were done by diverse specialists. Scribes and miniature painters were helped by parchment and paper makers, manufacturers of colors and gold leaves, binders and others. In monastic scriptoria the art of calligraphy was transferred from master to his pupils. There were also schools of calligraphy with traditions of their own.

Colophons of manuscripts written in each scriptorium contain inappreciable documental data. Colophons are remarkable not only for their diversity, but also for their reliability, as scribes didn’t communicate indirect information, as they were eye witnesses of everything they tell.